How to buy motorcycle in Thailand

Although Kawasaki KSR 110 PRO looks pretty awesome and powerful, it's weaker than average scooter. At least if you compare it by one of the most important parameters - its displacement. As KSR's name suggest, its displacement is 111cc (cm³). Average scooter is about 125cc (cm³). But displacement isn't everything. First of all KSR is light and also designed as one person only. So even with lower displacement KSR is stronger and quicker than any scooter at the market. How fast it can go? Manuals and official data mentions 90 Km/h (55 miles per hour). But from my own experience and talking with other people I came to conclusion, that maximum top speed of KSR 110 PRO is somewhere around 110 Km/h (70 miles per hour).

Below you can see video of driving Kawasaki KSR 110 at top speed. Model shown at the video is from year 2009. You tell by different headlight and front mask. The newest model is from 2013. There were some design changes, especially at the front of motorbike. Old model looked sleepy and lazy. The new look looks dangerously and predatory. However performance and maximum speed is the same. As you can see in the video, motorbike will reach 110 Km/h (70 miles per hour) very easily. Although it has traveled almost 12 000 Km (7 500 miles) already and it's definitely older motorbike.

My own experience of performance and top speed 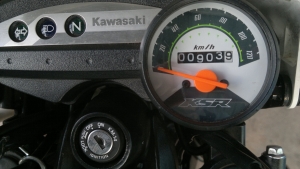 I drove KSR literally everywhere. At dirt roads, local roads, in town and even at highways. But I never reached maximum speed. Even at highway my top speed was about 90 Km/h (55 miles per hour). I think, that at this type of bike, it's enough. You wouldn't want to go faster. But even when I reached officially top speed, my KSR still had some reserves and I could easily go 110 Km/h (70 miles per hour). Someone could question it's performance with a heavy load. Its displacement is just 111cc (cm³) and it isn't one of the strongest motorbikes at the market. But I never had problem with this. It's designed as a single person motorbike and I was able to fit in 3 people. So our weight was somewhere about 200 Kg (440 lb). And we were still able to reach about 70 Km/h (50 miles per hour). 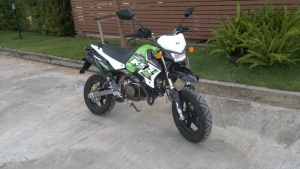 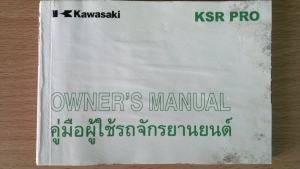 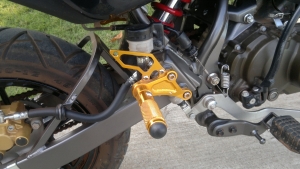 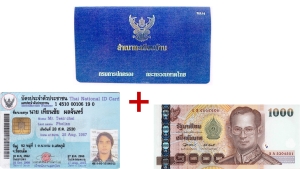 How to buy (used & new) motorcycle in Thailand (visa are OK)

SCROLL BACK TO THE TOP MENU